Sometimes the best trips and occasions are happening if you cannot plan everything upfront. The blizzard on our way to St. Moritz, the extremely snowy roads on the next day, and the superb handling and grip of the Alfa Romeo Stelvio which still made all of that an epic adventure 🙂 Everything started at Zürich airport where we got picked up by a lovely Alfa Romeo Giulia Veloce meaning this car had the 280 hp petrol engine, Q4 AWD system, and a Quadrifoglio-like exterior….at first glimpse it somehow looks like a Maserati from back 😉

On the next day we got up early to take the keys of new Stelvio, a car which was said to be built with the same DNA as the Giulia but with the space and higher seating position as known in the class of SUVs. Hard to believe honestly as the higher position of the weight usually leads to clear disadvantages in terms of handling. But to make a long story short, on that day and still today I am saying that this is one of the best handling SUV I have ever driven coming very close to something like a Porsche Macan and being clearly more driver focuses than all the GLCs, X3s, XC60s or what else is around in that class. And on the other hand, its still a comfortable and luxurious car! Just take a look into our DRIVE & SOUND video linked in, those roads are usually not meant for an SUV, and we were really making the pace here. 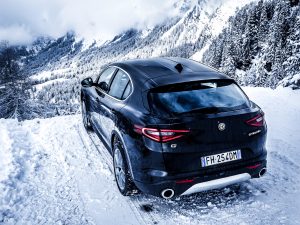 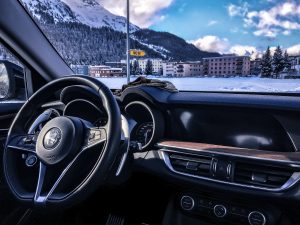 Design. Design is always a matter of taste, but if every second pedestrian in St. Moritz turns heads while the Stelvio is passing by….that cannot be a bad thing 😉

Something I am explaining in the #AutomannTalks in more detail is the fact that Alfa has not only made a great handling car but also stepped up significantly in terms of quality and technology. I am not saying that it is better than an Audi, BMW or Mercedes, but in most of the parts it is on pair, making it defiantly worth to check it our once it hits dealerships.